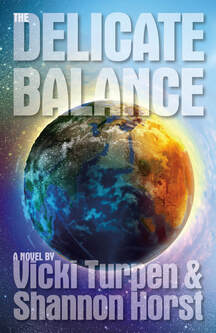 Purchase
​
​About the book
The Earth is dying—its life forms bound for extinction—unless the most fundamental of changes is made: Carbon-based fuels must be abandoned.

Chaos results—migrating hordes of starving people, abandoned hospitals and prisons (patients and inmates still inside), and deserted cities where only cockroaches still live.

But then Jesse Forester, the U.N. scientist responsible for the changes that survival demands, finds hints that the data at the core of the new global policy may be flawed. And murders start happening.

Rushing headlong into a frantic search for the truth, Jesse and his team discover pockets of people who are living rich and satisfying lives in Eden-like landscapes without any use of carbon fuels. As the plotters Jesse is seeking become more desperate, can these flourishing communities help avert humanity’s slow death from the poisonous fruits of climate change growing at its doorstep?

About the authors
Vicki Turpen’s clan includes five grown children, ten grandchildren, and six great-grandchildren. She has a M.A. degree with an emphasis on writing, and is an award-winning teacher who has taught drama, the Bible as literature, and English at the secondary level for many years in New Mexico and Colorado.

Vicki co-founded the Durango Lively Arts company and has taught environmental education. She is a member of Albuquerque’s Rotary del Sol club and Southwest Writers. She has written articles and editorials for the Christian Science Publishing Society and is a member of the Christian Science Church. She’s an intrepid gardener living in an intentional family community on a farm in Albuquerque’s South Valley.

Shannon Horst also lives at the farm in Albuquerque’s South Valley where she and her husband raised their two boys. Her educational background is in languages, linguistics, and communication. She is a former editor of Africa affairs for the Christian Science Monitor. Shannon spent three decades working with Allan Savory to help people change the way they make decisions. Currently, she’s the executive director of Tree New Mexico. She is an avid gardener and flyfisher. Second only to her spiritual path, Savory’s ideas have fundamentally changed the way she cares for the people in her life and her part in replenishing spaceship Earth.