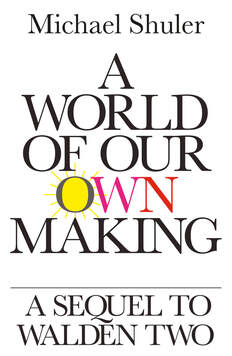 A World of Our Own Making
​A Sequel to Walden Two

​About the book
A utopian community is visited by a group of journalists interested in learning more about its unusual way of life—not knowing that one of them has a secret agenda. As the journalists become familiar with the varied innovative aspects of the network of Walden Two communities, they become intrigued with its theories of community structure, infant care, and education, as well as how ethics are taught in a rational society and the ways the community frees itself from the constraints of the larger society.

Based on the ideas espoused by B.F. Skinner in the 1940s, A World of Our Own Making: A Sequel to Walden Two is an engrossing tour through Skinner’s behavioral principles and an imaginative look at how they might actually be implemented. Author Michael Shuler’s in-depth look at the subject of “Behaviorology,” now taught at institutions of higher education around the world, brings Skinner’s Walden Two into the twenty-first century. It offers a new understanding of this ground-breaking discipline and its potential to revolutionize the basic structure of our society—for those with the courage and discipline to undertake it.

Readers will be surprised at both what they will learn and the unexpected ending as the plan of the mysterious visiting journalist is revealed, leading to an unusual revelation climaxing this refreshing read.

About the author
Michael Shuler, who resides in a small Midwestern town, has had a lifelong interest in B.F. Skinner and behavior analysis.

He was first led to the writings of Skinner and other behavior analysts by an unfavorable article about the noted psychologist titled “God Is a Variable Interval.” After reading Skinner’s Science and Human Behavior, Verbal Behavior, and Beyond Freedom and Dignity, and, over the years, Skinner’s complete works (as well as the works of others), he became interested in the possible application of a natural science of behavior toward reducing coercive practices and solving a host of the most dire global problems. This led him to apply this science to his personal and interpersonal life. He received a Baccalaureate Level Behaviorology Certificate and is the archivist for The International Behaviorology Institute.
​
A retired railroad engineer, he also enjoys bicycling, spending quality time with his family, and reading science-related books and journals, especially those concerning relatively new developments in language research involving equivalence relations and relational frame theory. A World of Our Own Making is his first novel.