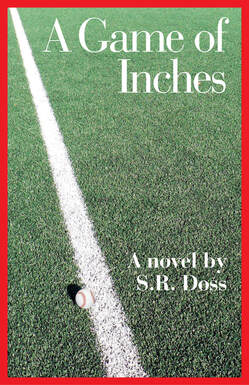 A Game of Inches

​About the book
“Life is like baseball” young paratrooper Phillip Dee was told in the S.R. Doss novel Blood on the Risers. “Sometimes you get a hit, sometimes the ball rolls foul. It’s a game of inches.” It is on the eve of the Vietnam War that Dee is led to realize life is indeed, like baseball, a matter of chance.

Now, in A Game of Inches, a novel set years later, Doss shows the reader how Dee himself becomes who he is by chance. In a three-part story he is seen as three entirely different men, depending on who he marries, three different women, each of them met more or less by accident.

Here he is seen as a newspaper reporter, then as a Vietnam combat veteran, and finally as a college professor, in a story meant to illustrate how random events, such as who one meets and marries, determine who one becomes—as well as to amuse us about the way life is truly a matter of chance.

About the author
S.R. Doss has been a journalist, paratrooper, and professor of philosophy. In addition to A Game of Inches, he is also the author of Blood on the Risers and Hattie’s Pink House, two earlier novels about the life of Phillip Dee.