Praise for The Fading of Lloyd
The Fading of Lloyd is a beautiful story of a fragile existence, a man born to endure a tragic reality created by an equally tragic action. We take the fractured journey toward Lloyd’s creation, following a trail of brutality and kindness that leads us to consider the massive potential for abuse in the social and medical ignorance of the times. A thought-provoking, utterly poignant, and completely satisfying tale of individual and societal struggles.
—Maria D’Marco 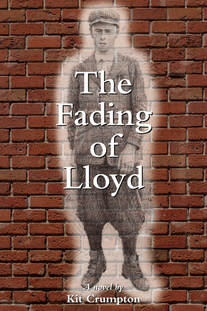 The Fading of Lloyd

​About the book
The Fading of Lloyd embroils the reader in family history as members struggle through historic challenges: the end of the American frontier, the dawn of railroad travel that wove Midwest communities together, World War I, and the social mores of the 1920s and 1930s. The Huttleston family, whose son, Lloyd, is mentally retarded, struggles to cope with the difficulties encountered with his care. After he is diagnosed schizophrenic and institutionalized, Lloyd dies during shock therapy. The Fading of Lloyd poses many questions by revealing a family’s journey with mental retardation and the actions of an insane asylum in early 20th century. Armed with today’s knowledge, this journey is filled with tragic realizations and even horror at what were considered “norms” at the time.

About the author
It was through her studies of Dr. Murray Bowen’s Family Systems Theory that Kit Crumpton became interested in genealogy and collecting oral histories of her own nuclear and extended family members. Her first historical novel, Raiding the Empire of the Sun: Tinian 1945, is based on the experiences of her father as a B-29 pilot in World War II. Her second historical novel, The Fading of Lloyd, is based on an uncle who was mentally retarded and died at Elgin State Hospital in Illinois in 1941.

In her non-writing life, Kit has four college degrees, and has worked as a Software Engineer, a Systems Engineer, and a Project Engineer.